A major Temporary Exhibition for 2022, “Fonthill Fever”, will mark the bicentenaries of William Beckford’s sales of the Fonthill Abbey estate, 1822-23. Further details when they are available.

The first Temporary Exhibition for 2021 focused on the making on Gold Hill of the famous Hovis Bread commercial by Ridley Scott in 1973, and included memorabilia kindly loaned by the family of Dennis Dunkley who worked for the Collett, Dickenson and Pearce advertising agency. CDP devised the slogan “As good for you today as it’s always been” which chimed perfectly with the atmosphere and tone of the five shots of Ridley Scott’s film. A re-mastered edition ran on ITV during the summer of 2019, prompting visits by TV News crews who created their own versions. These followed in the footsteps of other advertisers – including the promoters of an electric bike which was ridden UP the hill by Carl Barlow, the original baker’s boy. Also inspired by the Hovis ad to set foot on Gold Hill have been comedian Ronnie Barker, and most recently journalist Andrew Marr, who was profiling Sir Ridley Scott as one of the most influential modern Elizabethans.

Childhood was the theme for 2021’s displays in the Large Exhibition Room. Here there is space to do justice to the marvellous Dolls’ Houses hand-crafted by the late Tryphena Orchard. There are four miniature room settings in individual boxes, ranging from a Roman interior to a lavishly furnished Victorian drawing room occupied by authentically costumed residents. Tryphena also generously gave the Museum three much larger model buildings: two semi-detached houses in 1920’s style with roof terraces, planters and garden furniture, and a two-storey Tudor Tea Rooms. All three buildings are connected by an imaginative backstory which enabled Tryphena to decorate and furnish the interiors in superbly convincing detail. There is a wood-panelled Tea Room and Cake Shop on the ground floor, with another room and kitchen upstairs, all equipped with hundreds of tiny accessories including crockery, cakes and cooking facilities. As Claire Ryley prepared the Dolls’ Houses for display she described them (remotely) to ThisisAlfred’s Nick Crump. Please click here for details of the Gold Hill Museum Amazing Spaces Challenge.

On 07 August 2021 Her Majesty’s Lord Lieutenant of Dorset, Angus Campbell, unveiled a Blue Plaque in The Commons, Shaftesbury to commemorate the life of John Rutter (1796-1851).

Over a normal winter period Gold Hill Museum offers a series of monthly lectures for members of The Shaftesbury & District Historical Society and for the public. In effect the programme has been rolled over for twelve months by the COVID-19 pandemic. 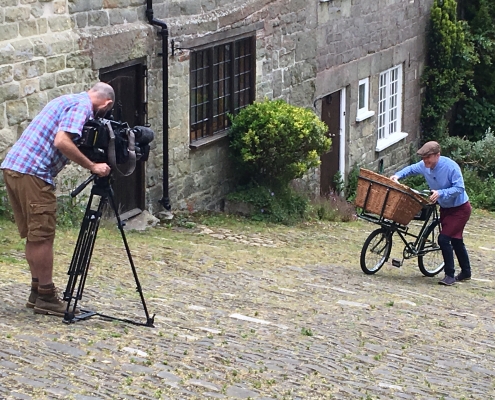 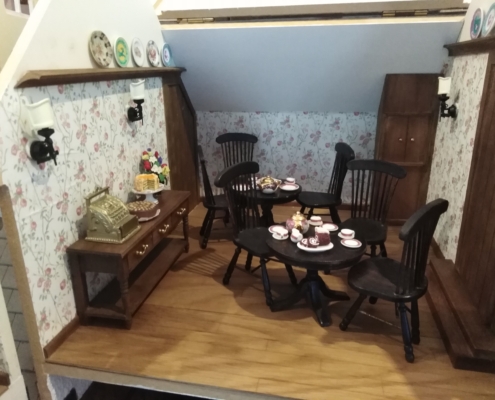