Mayor and Mayoress Lead the Revels.

Shaftesbury was beflagged as never before, and the oldest inhabitants declared that they had never seen such “goings on” in the streets, when the Mayor and Mayoress (Mr and Mrs Ralph Pearson) led off the dancing in the High Street with the “Palais Glide”, to music from loudspeakers. The crowd was probably the largest ever seen, and dancing continued with great zest for more than an hour. The Prime Minister’s speech was broadcast from the Town Hall after which the Mayor told the large crowd that the main theme was one of thankfulness and that their first duty was to attend one of the services at the churches in the evening to give thanks …. The Town Band played in the Square for an hour and in the evening there was a very successful dance in the ex-Service Men’s Hut, the proceeds of which were for the local hospital. Later there were bonfires on all the surrounding hills.

Thanks to Archivist Ray Simpson for providing this news cutting and the images below; the text is as originally printed.

The “Palais Glide” was an English sequence dance performed in lines of couples, popular from the mid-1930s. Winston Churchill’s speech was broadcast at 3p.m. He said that “We may allow ourselves a brief period of rejoicing” but pointed out that the War in the Pacific against Japan was still to be won. When interviewed by Shaftesbury School students for an oral history project, Mrs Benita Streeter of Fontmell Magna recalled that “The Grand Finale was a journey to the top of Melbury Beacon where an immense bonfire was lit by the youngest guide and scout; torches were lit from the fire and a flaming V was formed on the side of the hill.” 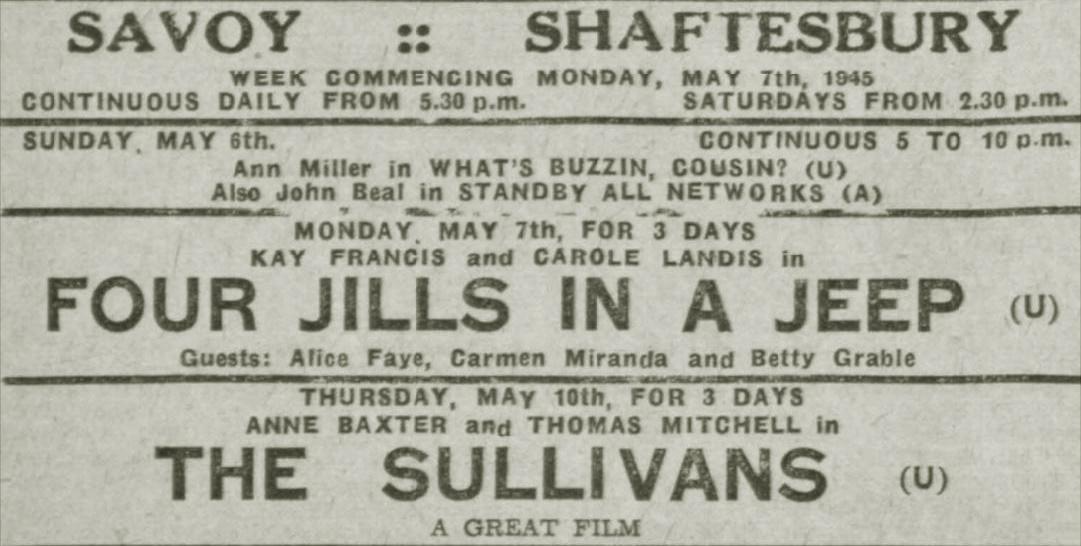 An alternative evening entertainment would have been a showing at the Savoy Cinema in Bimport of “Four Jills in a Jeep”. The film was based on the real-life experiences of American forces entertainers Kay Francis, Carole Landis, Martha Raye and Mitzi Mayfair who toured the UK and North Africa in late 1942 and early 1943. The New York Times declared that “It gives the painful impression of having been tossed together in a couple of hours.”