May 2019 marks the centenary of The Sale of Shaftesbury. In fact, most of the properties in the town were sold THREE times between September 1918 and May 1919, as Matthew Tagney shows in a fascinating new exhibition in the Small Exhibition Room. 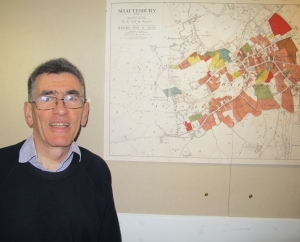 Hugh Grosvenor, second Baron Stalbridge, wrote to his tenants in February 1918 that “owing to the heavy death duties payable on my succession to the property … I am compelled to sell a large portion of my estates.” In the first instance this portion was bought by fellow racehorse owner and speculator James White, who very quickly sold to a Syndicate of three local men, including the current and a former Mayor. The exhibition shows how many of the open spaces enjoyed by modern Shastonians were preserved by public-spirited decisions made by Dr W.J. Harris, Alderman R.W. Borley and Mr Herbert Viney. Other public amenities still in use today were campaigned for, and won, by a Welfare Association founded after the Sale. Matthew acknowledges the support and assistance given by The Shaftesbury & District Historical Society Archivist, the Stalbridge History Society, and the Shaftesbury Open Spaces Group.

“The deficiency of water is a fruitful source of evil to the poor in Shaftesbury” wrote “Turbulent Quaker” John Rutter in 1849. In the Large Exhibition Room Janet Swiss takes a chronologically long look at the intriguing story of Water and Wells in Shaftesbury. 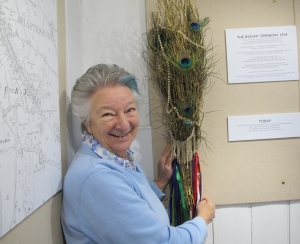 This exhibition features the Byzant Ceremony but also less well-known episodes such as the Grosvenor-funded building of the Waterworks at Barton Hill (where the open-air Swimming Pool uses part of the old pumping system) and the Great Freeze of 1895. So many of Shaftesbury’s Victorian water pipes were laid in shallow trenches that they froze solid. Mr J.T. Peach of Salisbury Street very kindly gave fellow Shastonians access to his still-running supply. 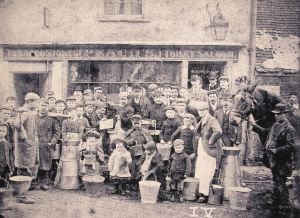 The Great Freeze of February 1895

In some respects the exhibition is deliberately incomplete as Janet hopes that locals will be able to add details and dots to the map of otherwise forgotten wells and cisterns.

Click here for ThisisAlfred’s report on The Sale of Shaftesbury exhibition.

And please click here for ThisisAlfred on Pipes, Pumps and Pubs

An invitation to join the volunteer team