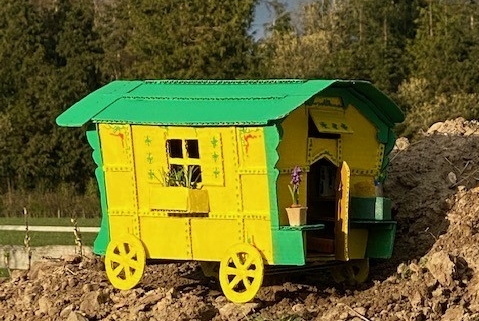 Kindly given by Toad to Ratty and Mole who refurbished it for their holidays. We are grateful to Elizabeth Hazelwood who is allowing it to be displayed at Gold Hill Museum (when we re-open) with other splendid entries for the Amazing Spaces Challenge. It involved lots of cardboard, glue and acrylic paint, and is accompanied by a little story of how Toad was approached to give the caravan to his friends.

This house was made by little stones, seeds from pumpkin and carbon by Alek Petrov of Lime Class. Alek wanted the house to look like an old house which will be improved in the future. Also, it reminds him of his grandparents’ house back in Bulgaria.

This little room is the home of some Pine Cones, descended from a colony based in Taunton, Somerset. Their ancestors watched from the Pine trees, fearing for their very existence, as first the old Orchard was demolished, and later, new housing developed only yards away. The Cones greatest existential threat came from a neighbour who objected to Pine Cones and leaves dropping in his garden! Two trees were cut down, leaving just one mighty pine standing.

Fortunately, Sally Jackson was on hand to rescue and relocate a select band of Cones to a new home in Shaftesbury, Dorset, where they could live in safety. This room is in their little home, where their lives so closely mirror events in our own human world, with all its ups and downs and happy and sad moments. …but…they have managed to come out at the top of the tree, or at least dangling pretty near it!