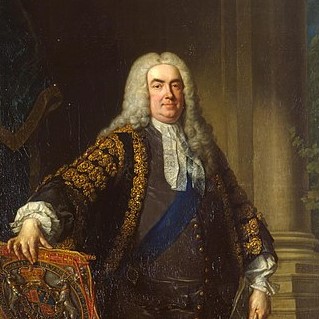 Or so the postmark said on today’s letters. “(Sir) Robert Walpole enters office as first UK Prime Minister 300 years ago 4 April 1721.” Walpole himself would have denied it. He did so explicitly in 1741, when he had held office continuously for 20 years. “I unequivocally deny that I am sole and prime minister.” The term was then an insult, aimed at politicians whose ambition exceeded their ability.

In 1721 Walpole, a Whig, was First Lord of the Treasury, Chancellor of the Exchequer, and Leader of the House of Commons. He had occupied some of these roles before, and had also been Secretary at War and Treasurer of the Navy. He was educated at Eton and from 1735 he lived at 10 Downing Street, so he did have some recognisably modern Prime Ministerial attributes. In other respects he broke the mould. He was one of 19 children of a Norfolk country squire, weighed twenty stones as an adult and possessed a blunt, rustic and politically incorrect turn of phrase. In cultivating Queen Caroline, the influential wife of King George II, he claimed to have “seized the right sow by the ear.”

But he was industrious, thinking nothing of starting on his correspondence at 6.00a.m., and financially adept – “the best master of figures of any man of his time”, according to a contemporary. This competence enabled him to ride out the crisis created by the South Sea Bubble of 1720. It’s not clear whether he personally made big profits or losses when the price of shares in the South Sea Company, dealing mainly in slaves and sugar, soared to stratospheric heights and then crashed. Many of his political rivals were implicated in corrupt share transactions, and ruined both financially and reputationally. Walpole earned the gratitude of King George I by damping down the scandal which could have engulfed the Hanoverian Royal Family. Cynics called him “the Screen Master General.”

The Whigs were the party of the Protestant Hanoverian Succession, dating from 1714. Many of the Tories were suspected of having secret sympathies for the exiled Catholic Stuarts, who failed to seize back the British throne in the Jacobite Rising of 1715. One of the founders of the Whig Party was Anthony Ashley-Cooper, first Earl of Shaftesbury, (1621-83) who built St Giles House at Wimborne St Giles. Ashley-Cooper died in exile after campaigning to exclude the Catholic James Duke of York from the line of inheritance. James duly succeeded his brother in 1685 but was deposed in the so-called Glorious Revolution of 1688. The last of the Protestant Stuarts, Queen Anne, died in 1714.

Walpole’s longevity as a governing politician owed much to his policies of peace and low taxes. His motto was Quieta Non Movere, or “Let Sleeping Dogs Lie.” He was a persuasive orator, but preferred to know in advance that he could rely on the votes of the “Robinocracy”. “All those men have their price”, he is reported to have said. About a third of the Members of the House of Commons, or 185 MPs, were “Placemen” in receipt of largesse from the government, in the form of publicly-known appointments, honours or pensions. Many more sweeteners may have been paid from secret service funds, the records of which have not survived. Walpole would have regarded all this as sensible man-management, but literary opponents such as Jonathan Swift, Samuel Johnson and Henry Fielding satirised what they saw as industrial-scale corruption.

Walpole’s two decades in government were well-compensated. Houghton Hall cost in excess of £200,000 (values of Walpole’s day) and its walls were lined with Old Masters, sold by a later generation to Catherine the Great of Russia, where they are now on display in the Hermitage Museum.

In 1739 Walpole was dragged into the War of Jenkins’s Ear. Captain Jenkins had been trading (probably slaves) in the Spanish American colonies, as Britain was permitted to do by Treaty, when in 1731 he claimed a Spanish coastguard had cut off his ear. There was uproar when he appeared before the House of Commons in March 1738 with his ear pickled in a bottle. “It is your war,” Walpole said to the Duke of Newcastle, a fellow Whig, “and I wish you well of it.” By 1742 the war had spread into Europe and Walpole had clearly lost control of the Commons. He resigned in February 1742, was made Earl of Orford by a grateful George II, and died in 1745, the same year as another abortive Jacobite coup.